Love is in the air | Chick-fil-A Goodyear & Avondale

Here, at Chick-Fil-A Avondale and Goodyear, we love Love. From the thousands of employees that our two stores have had, some of them were destined to fall in love! Throughout this Valentine’s season we reached out to just some of the amazing couples that met while working here together to hear their stories about each other. Some of these people knew each other before and rekindled their friendships, some reconnected after working together and some knew on the first day of meeting each other. It’s always so great to see that the friendships made while working at Chick-Fil-A together can end up lasting a lifetime.

“We actually had worked together for a while before we even started talking. It wasn’t until the holiday party that we started to get to know each other. From there, he asked me out in later in January. Closing together was always fun! Frank was a manager at one point, and I was a team leader. We made a good team!” Their favorite way to spend time together is “playing “It Takes Two”, which is a really cute video game all about teamwork. We also enjoy going to the movies frequently, especially when anything Marvel comes out”. They just celebrated their 5 year anniversary.

“We met at work on August 16th, 2019. It was her first day and I was her trainer. Neither of us were interested in one another as she found me annoying to begin with. She says after a while she started to like my personality but didn’t say anything quite yet. One day she was talking about apples while we were bagging and that was my favorite pie. I made a joke that she would be a good wife and that she should marry me. To my surprise she said okay. I was caught off guard so I said “well, you gotta take me on a date first” and again she said okay.” They are now married and have been together for 2.5 years. They enjoy watching films together and they “have started a cat family of 4 and are slowly making our house into a home”.

Renate and Carlos have been together since September 2006. Renate says “We didn’t even like each other the first few months! Then we became friends, then we started hanging out a lot, then I realized he was canceling plans with other girls to see me instead around the same time I realized I wanted to date him. Our favorite memories while working were just silly inside jokes and nicknames and working with my future best friend and partner. Also checking him out when he rolled up his sleeves to work in the kitchen 😉 ”. They currently have two children and life is busy for them. Renate is an RN and Carlos works as the director of Quality and Process at Chick-Fil-A Goodyear.

“It was Oscar’s first day and I introduced myself. I welcomed him to the team, and he was weirded out by how friendly I was. He actually tried to avoid me after that. He was on dishes and I kept going back to him,  not only to give him dishes but to make conversation and find out more about him. I was also judging the way he was doing dishes. We’re married, we have one son (such a cutie), and we’re living together. Life is super busy with work and family, we make a good team. We help each other balance it all”

Mason and Callie have been together for 2 years. Their favorite memory working together is seeing each other in the back of the store and while Callie was on headset. Their favorite pastime is watching tv and spending time together.

Matt and Lindhe have been together for 6 years. Their favorite memory of working together is when Matt burned his arm working on his car in the parking lot. Their favorite hobbies include watching shows and movies together and talking about them. They also like talking about cameras and lenses. Nowadays their life is filled with an active and vibrant toddler and trying to be good parents. Lindhe is the Marketing Director for Chick-fil-A Avondale and Goodyear.

“Julio and I were friends for maybe a year before we started dating. I had a big crush on him even then, and I did not hide it well. Ask anyone, my face would turn red when anyone would say his name. My favorite memory is when the crew would stay out late after closing and go to Denny’s to hang out. Those nights were the best. Julio and I welcomed a beautiful baby boy. Our days pretty much revolve around that cutie patootie.”

Candace and Reuben have been with Chick-Fil-A for 18 years. They have been together for 14 years. Reuben is our Director of Operations for Avondale and Candace is a Team Leader there as well. Together they have 2 children and life is very busy juggling parenthood, school, and a full time job. Some of their favorite memories are working together at team building activities and when “Reuben showed up for my high school graduation in A Tux with a tail!! It was super slick”

Zach and Bella have been together for 1 year. Their favorite hobby to do together is shopping. Their favorite memory working together is “on Valentine’s Day last year, Zach had dressed up and Cupid. I helped him with his outfit and painted his nails for it. It was fun getting to work with him that day and see him entertain everyone”. Both still work with us at Chick-Fil-A Goodyear.

“Love and I have been together for 5 months. I was training her on sandwich making, because she was so stunning I wasn’t sure what to say to her, and even when I did speak, I was stumbling over my words and tried my best to maintain eye contact. Ever since I  transferred, we don’t see each other as often. But when we do get the chance we enjoy every moment with each other”

We’ve been friends for a year and we never really thought anything of each other. One Saturday night though, we were both running shift and when I walked into the office, I finally noticed Gena. She was kind as always and asked how I was doing, all I could think of was how I should try and get to know her better. That same night she got the money accepter jammed and I thought it’d be funny to text her to tease her.” -Jimmy  “While Jimmy and I were getting to know each other he mentioned that he’s been watching the office. I let him know how much I love the office and how good it is. He was on the last episode of the office and mentioned how we should go on break together one day and watch the last episode of the office together. I thought it was the cutest thing how he saved the last episode so we can watch it together.” We are both in school so time away from each other can be hard but we always make time for each other even if it’s doing homework together. We have different jobs but pretty much the same schedules.  -Gena

Meet Taylor and Jacob! “My family and I had been going to Chick-fil-A for years on Tuesday nights for family nights. I would always see Jacob working, but that was it. I never talked to him other than asking him for a refill. When I got the job at Chick-fil-A, to support my daughter as a single young mother, I came in for orientation and Jacob was leading it! He stopped in the middle of talking to my group to ask me why I looked so familiar and told him that my family was always in on Tuesday and it clicked! After that, he liked to make jokes here and there with me about anything! Which is when I realized, “Hmmm, I guess he’s kinda funny… and cute!”. After a few weeks, we started texting, and then one day when I needed to work a shift and I couldn’t find a babysitter he offered to watch my little girl! After that, I knew he was the one. He was THE BEST with her. The rest is history! We have been married for 7 years!”

These are just some of the relationships that have formed from our two stores! Can you imagine the other relationships that have blossomed from the 2,598 Chick-Fil-A franchises? Here at Chick-Fil-A we found that forming good relationships and friendships with our co-workers is a great way to drive success because they will love what they are doing and who they are with. In the wise words of our founder Truett Cathy  “nearly every moment of every day we have the opportunity to give something to someone else: our time, our love, our resources. I have always found more joy in giving when I did not expect anything”. 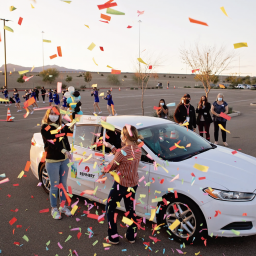 We are big fans of Night to Shine, a special needs prom put on by the Tim Tebow Foundation. We’re…